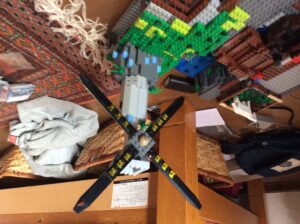 Today is my third anniversary, the day I officially made aliya and became an Israeli citizen. I love living in Jerusalem. I love the friends I’ve made and seeing how my children blossomed here, Miriam with her mosaics and beautiful friendships with other young women and Seiji with his life in an international boarding high school where he learned to communicate juggling three languages.

Seiji is back in Japan now but today it was as if he was here. I was scrolling through old photos and I found one of his Lego creations dated 2014. For some reason, he built a windmill. I don’t think he ever saw a windmill in Japan, so where this windmill came from I don’t know. Three years later when he arrived in Israel, I showed him up to his room, which had a porthole type of window looking out over a windmill. “Oh man,” he said, his mouth dropping open when he realized he could lie in bed and watch the blades of the windmill turn through the porthole window.

I do believe God shows us signs when we are exactly where we are meant to be. Today, Seiji got his too. And though he is in Tokyo now, and we no longer live next to a windmill, there’s a wonderful feeling of being guided along this journey in Israel.

I'm a Jerusalem-based artist and writer of a memoir in progress about rediscovering my Jewish roots in Japan. View all posts by admin